The Truth About Mountain Dew Mouth

“Sugar kills,” reads the headline, as the article then proceeds to lecture us on the harm of sugar and soda, using “Mountain Dew mouth” as the emphasis of the argument.

The term has come to define a region. It has also come to define debates around decisions with far-reaching consequences for the Appalachian region — where disproportionately bad oral health has given form to the term and to what it stands for. In the dental world, this problem of “Mountain Dew mouth” is often used (rightly or wrongly) to hammer down on the evils of soda and the harm it can do to us. ‘Quit now, before you regret it!’

Soda is harmful, and it can damage your teeth in many ways, just like it can do harm to other parts of your body. There is no denying the costs of consuming soda. Are there more pieces to the puzzle, though?

“Mountain Dew mouth” is about so much more than soda pop. It’s about a part of American society that has gone forgotten. It’s about a people with inadequate access to affordable dental care, or who have otherwise lost their faith in dental care or whatever anyone has to offer them. “Mountain Dew mouth” has turned into a word of shame, and to me that signals just how little understanding there is of the problem. 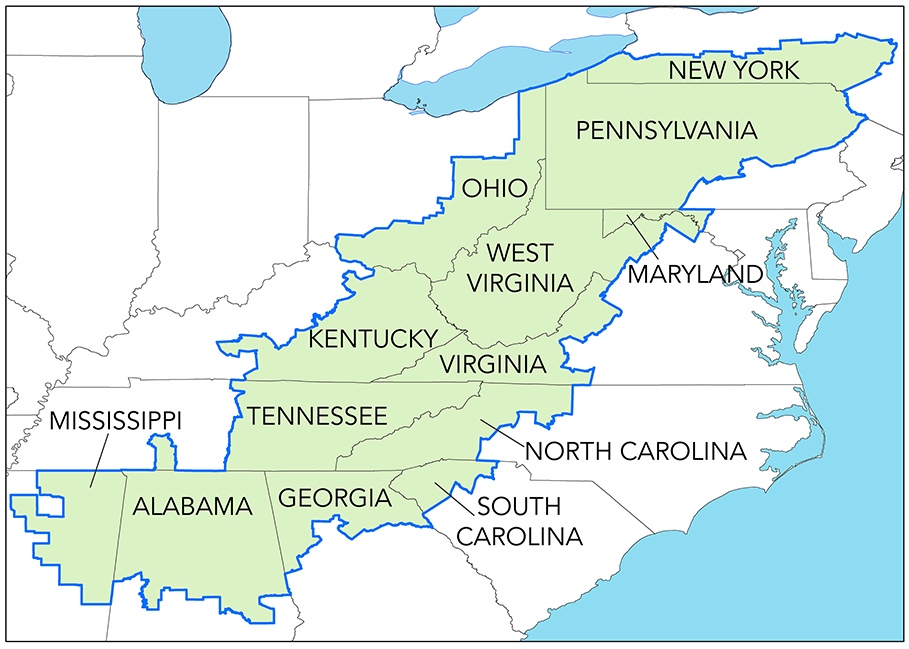 What is “Mountain Dew Mouth?”

“Some 26 percent of preschoolers in the region have tooth decay, and 15 percent of 18- to 2-year-olds have had a tooth extracted because of decay or erosion. That’s according to calculations by Singer, who is working with Harris,” writes Eliza Barclay, at NPR.

Harris refers to Pricilla Harris, who in 2009 published a legal brief that explored the depths of the region’s, my region’s, affinity with carbonated beverages. Dana Singer is a research analyst whose research she dedicates to a long battle against heavily sugared drinks. Unfortunately, I personally cannot access Harris’ brief and I’m not sure whether Singer’s figures come from Harris’ paper or from another source entirely.

No matter, the disproportionate occurrence of tooth decay and tooth loss in the Appalachian region has been confirmed by others too. In a 2015 paper, authors Kim, Manz, and Weyant collected data from a statewide, school-based survey based here in Pennsylvania. They found that there is indeed a wide and dramatic disparity between the dental health of children in Appalachian counties as compared to Non-Appalachian counties in the state. On average, we’re talking about a 14–15 percent difference in tooth decay cases.

Studies conducted by the state government of Ohio have found a similar relationship between Appalachian counties there and their non-Appalachian counterparts — a 59-percent higher rate in dental caries, among the former.

What has caused this disparity? This is a tough question. The common answer: Mountain Dew and other soda. Thus, the coining of the term ‘Mountain Dew mouth.’

As a brief aside, the first use of ‘Mountain Dew mouth’ was apparently in Diane Sawyer’s 2009 documentary, Children of the Mountains.

Is this connection between soda and oral health correct?

A limited 2006 study by von Fraunhofer found that “cola drinks dissolved enamel 55-65 times more than both water and root beer.” Similarly, “enamel dissolution in canned iced tea was some 30 times greater than that produced by brewed black tea and coffee.” Speaking directly to Mountain Dew, which was categorized with similar drinks and called non-Cola, the study said that, “The enamel dissolution was two to five times greater among non-cola drinks than among cola beverages.”

That is, not only is soda bad for you, but some soda is worse for you than others. More specifically, whereas a Coke will erode your teeth at a rate 55-65 times greater than water, Mountain Dew is two to five times worse than that.

The research is clear, soda is bad for you. Most especially, it’s bad for your children. Children without their adult teeth are among the highest at risk of tooth decay caused by the consumption of carbonated and sugary drinks, although the risk is in it for all of us nonetheless.

Decay is a bacterial disease; the bacteria in your mouth like carbohydrates, which sugars are, and thus sugary drinks promote an environment where decay (and gum disease) are more likely to occur.

Erosion, on the other hand, is caused by the acidity of the soda. When we think of acidity, we immediately think of pH, and indeed the differences in pH levels between a carbonated drink and your mouth’s saliva have been brought up. It may not be pH that’s relevant here, though. There are other interactions between acidity and your teeth, and the higher the acid content of the drink, the more it will erode your teeth.

According to the aforementioned 2006 study by van Fraunhofer, it’s the amount of acidy that matters the most. In fact, he reports a similar nature and intensity to the oral health problems encountered by those who drank regular soda and those that drank diet, which also suggests that the sugar content may not be as important as previously thought (which does not mean it’s irrelevant or not important consider).

Allow me to repeat something, it does not matter if you are drinking regular or diet. The effects are largely the same.

That seals it, right? Soda must be the cause of all Appalachia’s problems.

Again, the science is damning when it comes to soda consumption and dental health. That doesn’t mean it explains everything going on in Appalachia.

“[H]ow many Americans know or care that a…“do not drink the water” warning is above every drinking fountain in the Knott County Opportunity Center in Kentucky, which houses a community college, a Head Start program and the county library — and that the warning has been necessary for a decade?” writes Ron Rash, in the New York Times.

About two-thirds of the U.S. coal is produced in Appalachia. The Pittsburg coal seam, just east of our home here in Greensburg, has produced over 13 billion tons of the stuff since its inception. Isn’t that amazing? For a century it’s also been a manufacturing center, from steel to chemicals. These industries can take a toll on local water quality.

In Charleston, investigators found arsenic, barium, lead, and manganese, among other terrible things, in the local tap water. These are elements found in 93 percent of the waste injected by the local coal mine.

Local and federal programs have helped provide clean, high-quality water to much of the Appalachian Region in the past two decades, but there are several communities in West Virginia, Tennessee, North Carolina, and Georgia where there is serious underinvestment in clean drinking sources. Small wonder the locals turn to soda.

There’s something else the local industry affects. The U.S. economy is changing, and it has hit the region particularly hard. While the U.S. manufacturing continues to grow in output, employment opportunities are decreasing as jobs are outsourced or automated. If fewer jobs are available, people make less money. And if people make less money, it’s far more difficult to access the dental care you need.

Small wonder, then, that we see more tooth loss amongst poorer income groups. We also, coincidentally — or, well, probably not — see a relationship between lower frequency in dental visits and income. Consider the following report published by the Center for Health Workforce Studies, using data from Kentucky: 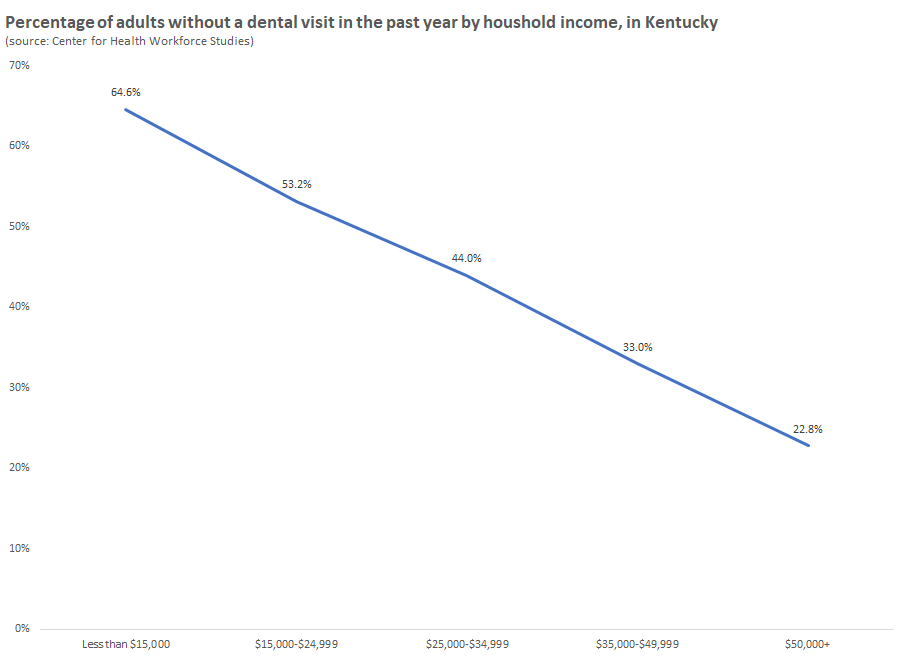 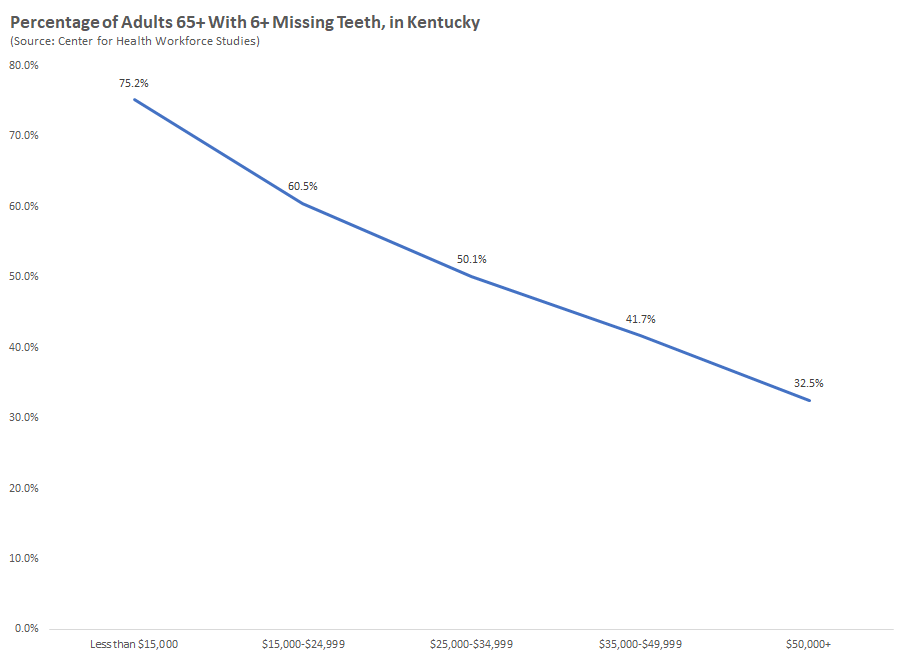 Access to, and affordability of, dental care matters. It’s not just income groups that show differences in dental care. In Kentucky, the older you are, the less likely it is that you visited the dentist: 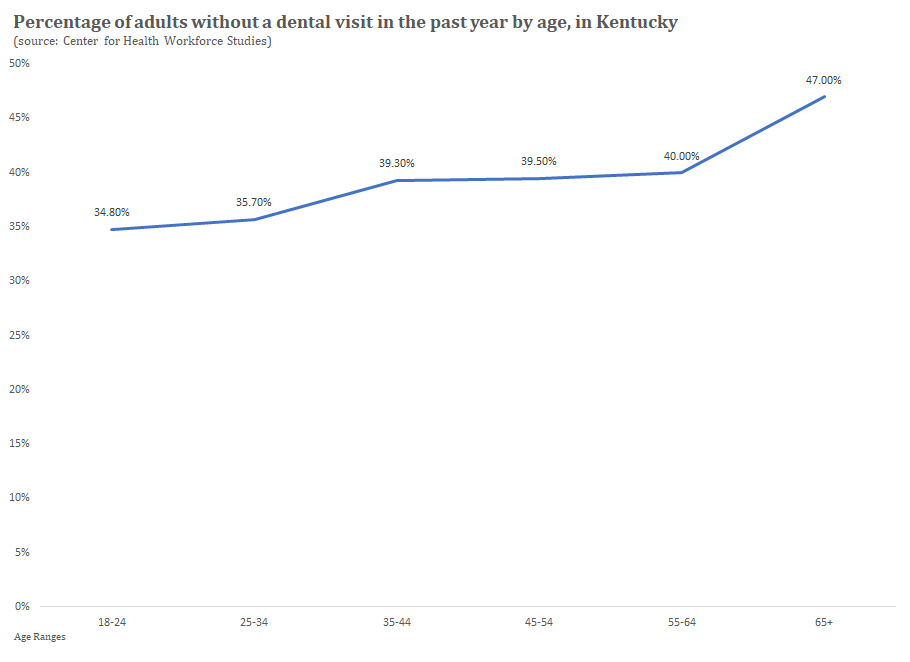 It’s not just Kentucky. In Ohio, “dental care is the single most common unmet health care among children in the region,” according to the afore-cited Ohio study. Furthermore, “in some counties, one-quarter to one-third of adults can’t get care.”

According to a 1998 Ohio Family Health Survey, almost half of dentists don’t access Medicaid. Another 29% accept it but have never filed a claim. Only 14% of dentists filed claims for more than 51 patients. What does that say about access to care for the region’s poorest? And it’s the poorest who are most affected by bad water quality. It’s the poorest who need dental care the most.

It’s not just about affordability, either (although affordability is a huge deal). It’s also about access. Many of Appalachia’s regions lack enough dentists. Many people live 10 miles away from the nearest dentist. Mind you, the number of dentists cuts both ways. The more there are, the more there are to serve the community, and also the cheaper their cost, on average (it’s about the law of supply, as an economist would say).

It’s not controversial to say that the effects of soda on your teeth will differ between those who have easy access to the dentist and those that don’t.

Should I Stop Drinking Soda?

If you drink a can of soda a day, chances are you’re not going to get “Mountain Dew mouth.” Look, Appalachia’s dental care problems are caused by a confluence of so many factors that it’s unfair to the Appalachian people to focus on soda. The focus has made the people of the region look lazy and uncaring about their condition, which is absurd. The problem has more to do with dental care and economic conditions than it does with what they drink.

Still, the science is there and it says soda is an incredibly powerful source of tooth erosion. What’s the moral of the story?

If you know the consequences, and your fair to yourself, you’ll make the right choices. Maybe you drink soda, but maybe you also visit the dentist frequently. Or maybe you’re very good about brushing and taking care of your teeth.

Have a soda. Live a little. Enjoy yourself. And be responsible, not because some dentist tells you to, rather because you deserve it.

Why did I become a dentist? What makes me wake up in the morning?

It's hard to answer this question and not sound cheesy, but the truth is that there is something special about the way a patient smiles at you after looking at their new crown or their new veneer, or even after a simple cleaning. There's a gleam of confidence and awareness in their eyes, and it's absolutely magical. That's why I'm a dentist.
Previous post What Does Marijuana do to my Teeth? Next post Did Bad Oral Health Kill Sea World’s Orcas?